Coolmine Therapeutic Community was the first, and for almost a decade, the only voluntary body concerned with the treatment of addicts in Dublin. Established in 1973, the initiative for this development came from Lord Paddy Rossmore, an Anglo-Irish peer who became interested in drug problems from seeing friends get into difficulties.

Lord Rossmore, having visited Phoenix House in London, invited Brian Delaney and Jacqueline Ballard to Ireland to establish a therapeutic community at Coolmine Lodge. Financial support came from the Eastern Health Board, with the support of Professor Ivor Browne, from a range of other statutory sources and from voluntary fundraising.

For the first seven years of its existence Coolmine remained a relatively small service and it was not until the major growth in the prevalence of heroin use in Dublin from 1980 onwards that Coolmine entered an expansionist stage. In 1983 Coolmine acquired a new residential facility, near Navan in Co. Meath, which was capable of accommodating up to a hundred individuals. A strong cooperative relationship developed between Jervis Street and Coolmine throughout the 1980`s. A separate women`s service was established in 1989 at Ashleigh House.

Brian Delaney was our first CEO, followed in 1978 by Jim Comberton who acted as Executive Chairman. He was assisted by Tom McGarry who was Programme Director. In 1998 Jim retired and Tom left us around the same time. The separate programme for women, mentioned above, was established by Jim and Tom. Liam Hickey was our next CEO, and an independent chairperson of the board, Martin Tansey, then Head of the Probation and Welfare Service, was appointed. David Keenan served as our CEO, from 2000 to 2003. Paul Conlon then became our next CEO in 2004. Paul made a lot of changes over the years and one of his major achievements was to open up the only mother & child residential treatment service in Ireland. 2013 marks another change in Coolmine’s forty year history when our former Head of Services, Pauline McKeown, became our new Chief Executive Officer.

Paddy Rossmore, On The Left, And Brian Delaney, Cleaning One Of The Chimneys. 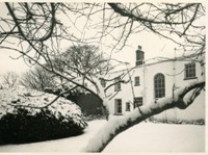 Paddy Rossmore Bringing Some Order To The Garden.

As with 40 years ago Coolmine is still providing a rehabilitation service for clients in recovery from alcohol and drugs use, unfortunately our services are needed now more than ever. We have always been committed, in an explicit way, to modernising the interventions and style of counselling used within our residential and community facilities and to adopt evidence based and professional counselling standards where compatible and practical together with the expansion of our continuum of care. Coolmine now has the highest number of trained Community Reinforcement Approach (CRA) staff in Europe. In 2012 we were awarded the Royal College of Psychiatrist’s Community of Communities (C of C) accreditation. We are not new to the idea of organisational transformation and have delivered significant changes to our programmes over the years; e.g. reduced the length of the programme, implemented strategies to improves access such as detoxification and services for women with children, to name but a few.

Close Menu
We use cookies on our website to give you the most relevant experience by remembering your preferences and repeat visits. By clicking “Accept”, you consent to the use of the selected cookies. However you may visit Cookie Settings to provide a controlled consent.
Cookie settingsACCEPT
Manage consent

This website uses cookies to improve your experience while you navigate through the website. Out of these cookies, the cookies that are categorized as necessary are stored on your browser as they are essential for the working of basic functionalities of the website. We also use third-party cookies that help us analyze and understand how you use this website. These cookies will be stored in your browser only with your consent. You also have the option to opt-out of these cookies. But opting out of some of these cookies may have an effect on your browsing experience.
Necessary Always Enabled
Necessary cookies are absolutely essential for the website to function properly. These cookies ensure basic functionalities and security features of the website, anonymously.
Functional
Functional cookies help to perform certain functionalities like sharing the content of the website on social media platforms, collect feedbacks, and other third-party features.
Performance
Performance cookies are used to understand and analyze the key performance indexes of the website which helps in delivering a better user experience for the visitors.
Analytics
Analytical cookies are used to understand how visitors interact with the website. These cookies help provide information on metrics the number of visitors, bounce rate, traffic source, etc.
Advertisement
Advertisement cookies are used to provide visitors with relevant ads and marketing campaigns. These cookies track visitors across websites and collect information to provide customized ads.
Others
Other uncategorized cookies are those that are being analyzed and have not been classified into a category as yet.
Powered by